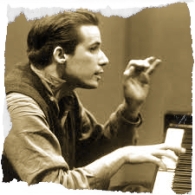 In this entry we go back to the year of 1981 for an interview recording of my utmost favorite composer and revered pianist Glenn Gould. The first 6 minutes of the interview is a discussion with Gould on his approach in re-working his original recording of Bach’s Goldberg Variations with the remainder offering extraordinary video of Gould performing the Variations in studio.

What I absolutely revere of Gould’s approach as a composer is in particular what he calls the “critical and non-servile attitude in interpreting scores, which he also ascribed to Bach himself. In commenting on his original recording of Bach’s Goldberg Variations, Gould notes that he had originally treated the 30 variations too much as “independent minded pieces” each “going their own way and making comment on the grand base on which they all are formed”. In his re-recording he wished to expose what he calls “the temporal relationship” within the 30 Variations, the “sense of pulse that went through” its grand base.

In Gould’s own words, Bach’s Goldberg Variations “offer 30 remarkable views of an entirely unremarkable grand based theme, views which like snapshots randomly filed range back and forth across the decades, revealing at one moment Bach’s maturity, at another the indulgent exhibitionism of his youth, and at all the best moments the passionate of asceticism of his old age”. Gould’s performance is a masterpiece that defines the modern age.