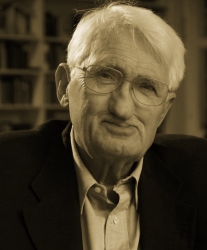 In this rare interview, Professor Jürgen Habermas speaks about the philosophical role of religious traditions in secular modernity and the prestigious awarding of the 2005 Holbergprisens (The Holberg Prize). In the interview, Professor Habermas argues that modern society depends on not only the perpetuation of new technologies but also on the critique and the subjective reinterpretation of its built-in religious and moral traditions that give secular society its meaningful political and social orientations.

“Society is not only depending on technologies and their knowledge which feeds into new technologies but society is indeed depending on a proper continuation, reconstruction and criticism of its own traditions because these traditions are the ones that give us orientation of how to understand men in society men in the world.”