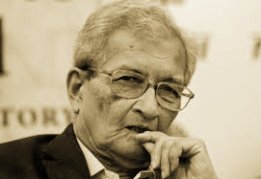 At the 2011 Owen J. Roberts Memorial Lecture in Constitutional Law, Professor Amartya Sen presented a short paper on the philosophy of language and the evolution of interpreting constitutional and human rights provisions over time. Professor Sen argued that the act of constitutional interpretation itself must confront the particular philosophical language problems of interpreting the collection of words of which a constitution is explicitly constitutive, thus casting doubts over the Originalism of Robert Bork and the textualism of Calabresi.

When British rule ended in 1947, the pursuit of justice as a guiding principle was one of the questions that concerned the makers of the constitution of newly independent India. The disagreement and difficulty lied in combining “fixed legal rules that a constitution demands” with “built in flexibility so that new ideas that win future argument can be accommodated within an appropriately responsive constitutional framework”. For Professor Sen, the makers of the new democratic constitution of India were “explicitly” and by “implication” confronted with philosophical problems of interpretation of the constitution that go beyond it as a mere “collection of words”.